MPR (Magnetic Proton Recoil Spectrometer) measures how protons — hydrogen nuclei — are knocked out by neutrons hitting a hydrogen-rich target. In contrast to the TOFOR operating principle, MPR only collects recoils moving in a narrow cone in the forward direction, protons that get nearly all of the original neutrons' energy. The energy is measured by letting the protons move through a well defined magnetic field, where the deflection directly gives the proton energy (see figure below).

The MPR spectrometer was installed at JET in 1996, and was used to analyse experiments with DT plasmas. The upgraded version MPRu was ready in 2005, and is adapted for use also at the lower neutron energies from experiments with DD reactions. The data acquisition and control system have also been upgraded.

With the upgraded MPR spectrometers the total neutron production at JET can be determined, and from this the fusion power and the fuel composition can be calculated. 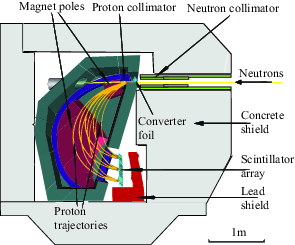