Star polymers are within the most topologically entangled macromolecules. For a star to move the current theory is that one arm must retract to the branch point. The probability of this event falls exponentially with molecular weight, and a quicker relaxation pathway eventually takes over. With a simulation over a hundred times faster than earlier studies, it is demonstrated that the mean square displacement scales with a power law 1/16 in time, instead of the previously assumed zero. It suggests that star polymer motion is the result of two linear relaxations coinciding in time. By analogy to linear polymers, which reptate with a random walk embedded in a 3D network, we show that star polymers relax by a random walk in a 5D network. 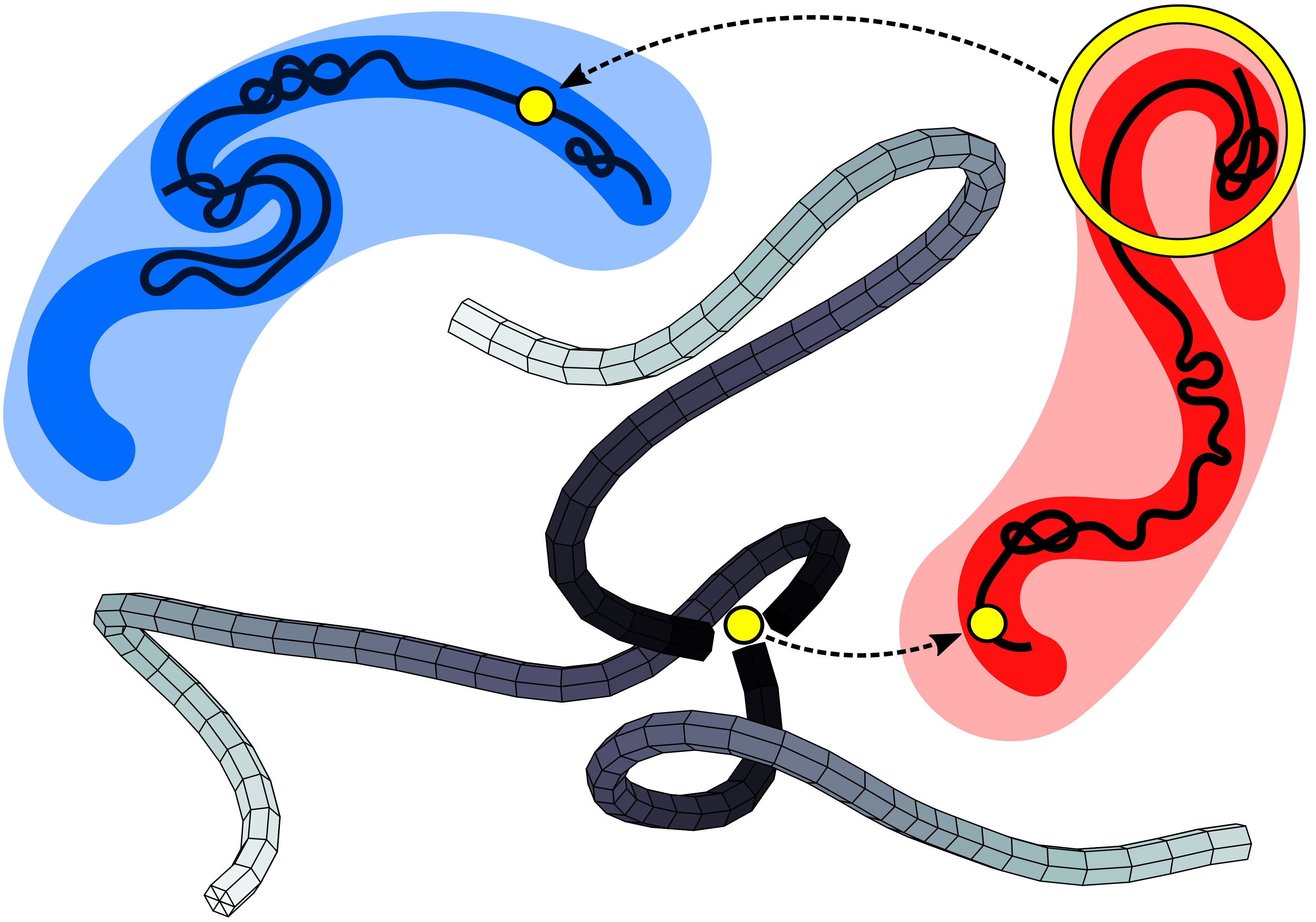 From a humble plastic bag to ultra-light airplane wings – polymers are everywhere. These molecules are long chains of atoms that are chemically joined to play many roles that we all love (organic photovoltaics) and hate (indestructible plastic pollution). Polymers are useful in liquid form as well: the difference between tomato puree and ketchup is merely 0.5% of xanthan gum, which is a polymer made from sugar. Ketchup is thick but not sticky, all thanks to the xanthan chains that are so long that they interpenetrate and form an entangled web that resists flow. The same principle also underpins high tech applications like ink jet printing.

There is a possibility to decrease the amount of thickening additives, without compromising their effect on flow, which would save costs and minimize the environmental impact. If we connect the ends of three linear chains to a single point, the result is called a star polymer. Due to this branched architecture, webs of star polymers are dramatically more entangled, than their linear cousins of the same mass. To explain how this entanglement works, let us start with the concept of a random walk. Imagine you are on a hike and you play a game: toss a coin four times and take a step left for every heads, and a step right for every tails. You will most often end up two steps away from the starting point. In fact, if we multiply the final distance by itself, 2x2=4, it is equal to the number of random steps. This is the law of diffusion, and it governs the motion of small molecules like water.

For polymers, we have to take the random walk to higher dimensions. Imagine you are on a hike again, but this time you bring a hundred friends and for safety, you all link up with a rope. Every member starts playing the random walk game, but the rope has some slack, so it takes a while for you to feel the pull of the entire team. This kind of motion is a random walk, embedded in another, slower random walk. Here you need to take 4x4=16 random steps to move a distance of two steps. Next, imagine hundreds of rope teams all mingled up so densely that you only have room to move up or down the line of your own team. The effect of the crowd brings us to 16x16=256 steps. Can you guess how many steps would you need if we add an extra branch to the middle of each rope team? Hint: it is not 256x256=65536. It takes a staggering 65536x65536=4.3 billion random attempts to get merely two steps away.

This result has been shown in a recent study “5D Entanglement in Star Polymer Dynamics”, by Airidas Korolkovas published in Advanced Theory and Simulations, a new journal focusing on breakthroughs in the science of modelling. A unique computer algorithm was invented to capture the billions of steps needed for entangled polymers. It runs on a Graphical Processing Unit (GPU) and takes advantage of texture mapping, an often-overlooked functionality. Originally, this feature was designed for video games, but here it has been repurposed to calculate the molecular forces inside a little polymer droplet. Using a streamlined physics model, this simulation runs hundreds of times faster than traditional code. It opens new horizons on the time scales that can be addressed in scientific computing. This can further push the frontiers for the latest generation of supercomputers, like the recently opened Summit in Oak Ridge National Lab, USA, which has almost 30,000 GPUs.

The effect of higher dimensional entanglement can be observed in real life, using an instrument called neutron spin-echo. This machine shoots tiny subatomic particles, called neutrons, and listens to the echo of their nuclear spin as they scatter, or bounce off the polymer sample. A prime example is the IN15 beamline at the Institut Laue-Langevin, France, where the entanglement of linear polymers was first discovered. Thanks to constant upgrades and to upcoming new facilities like the European Spallation Source, Sweden, an experimental proof of the simulation prediction for star polymers may soon be within reach. A combination of high performance computing and neutron scattering is a powerful tool of discovery for new materials that improve our quality of life and respect the environment.