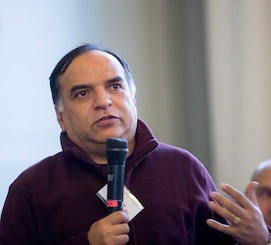 Brief CV. Publications up to April 2017. CV and publications.

The properties of a material are highly dependent on the crystal structure. We develop ab initio theory capable to predict new structures, utilizing the search tools to explore the configurational space based on genetic algorithm methods, random search methods, data mine approaches, topological modeling methods, and metadynamics. We employ this method to study the structure of the novel complex light metal hydrides as well as to investigate the H₂ dissociation on the metal hydride surfaces. Predicting crystal structures is a computational time-consuming task, therefore we spend a lot of time on optimizing the computational methods.

The nanostructure based multijunction solar cells are very promising due to their high efficiency due to their light absorbing capabilities for a wide range of the solar spectrum. They have several layers engineered from the same semiconducting host material eliminating the lattice mismatch between the layers to avoid any structural defects (we hope this technique can be extended for flexible structures). We engineer band gaps in the layers by introducing impurities, so that the top layer of the multijunction solar cell can capture the near blue region of the solar spectrum followed by a lower bandgap materials and even lower until ones that absorb the red-green part of the solar spectrum, covering the entire spectrum of the solar light. So, the proposed multijunction solar cell materials, consist of wide bandgap layer followed by a relatively lower bandgap ones allow for the photon to enter freely and be captured when their energy matches the bandgap width.

Organic based battery materials can be produced from biomass and are expected to have a significantly lower environmental footprint from raw material extraction and material processing. Current organic matter based alternatives offer capacities comparable to their inorganic counterparts but in most cases they suffer from poor cycling stability, low conductivity or large polarization losses. In this project the combination of a conductive polymer backbone with high capacity redox groups is studied to overcome capacity fading due to dissolution as well as conductivity pathways through the material.

Molecular electronics is a rapidly developing research field at the interface of physics, chemistry, and engineering, in which electron transport through molecules is investigated. The project involves design and ab initio simulations of molecular structures, metal and semiconductor surfaces and molecular adsorption applied to molecular electronics, biological- and nano-sensors and synthesis of novel materials. Our research is performed within the environment of the Uppsala University UniMolecular Electronics Center (U³MEC) which focuses on molecular electronics based on single or small assemblies of molecules.

The understanding of H₂ dissociation on metal surfaces is a key point toward the design of suitable hydrogen storage materials. We calculate the H₂-dissociation energy barriers with the Nudged Elastic Band Method and investigate the effect of impurities on these barriers. We aim on catalysts design that fasten the H-sorption reactions in novel hydrogen storage materials.

A promising sustainable solution for solar energy harvesting and utilization is artificial photosynthesis: the sunlight is used to split the water molecules and subsequently reduce the CO₂, producing methane and methanol. We computationally design photoelectrocatalysts suitable for such application.

Publications up to April 2017.