Hadron Physics is the physics of strongly interacting particles

Quantum Chromodynamics (QCD) is the accepted quantum field theory for the strong interaction and describes this interaction in terms of gluon exchanges between the quarks. QCD is well tested at short distances (high energies) where asymptotic freedom makes a perturbative treatment possible. However, QCD becomes non-calculable as the basic quark-gluon coupling grows; this occurs at distance scales of the order of 10-15 m, i.e. the typical size of a hadron. Then non-perturbative phenomena appear leading to the formation of hadrons, hadronic mass-generation, confinement and chiral symmetry breaking.

An understanding of these phenomena are the major tasks of hadronic physics. To approach a solution presents a profound intellectual challenge for both experiment and theory.

Experiments with antiprotons have proven to be a rich source of information in hadron physics. With the new proposed high energy storage ring for antiprotons, HESR, at FAIR the physics of strange and charm quarks will be accessible in antiproton-proton annihilations. The charm quark physics have received a lot of attention recently due to the discovery of unexpectedly narrow states. Furthermore, the strange and charm quark regions represent the transition region between the perturbative QCD at short scales and strong QCD at fm-scales.

The PANDA experiment has a broad research program which includes: 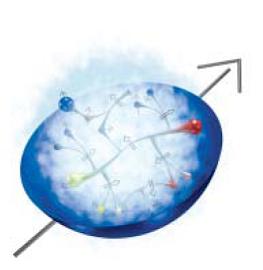 The activities of the Uppsala Hadron Physics group are summarised on the activities page. More detailed descriptions can be found in the reports page.