Quarks and gluons are the elementary particles that are subject to the strong interaction. Hadrons are the composite particles built up from quarks and gluons. At present there are two main challenges in particle physics: To search for physics beyond the standard model and to understand how the elementary particles build up composite structures, i.e. how they build up the matter around us. For both questions theoretical hadron physics is an indispensable tool.

One field of research where one tries to unravel signs of physics beyond the standard model is the study of observables where one can obtain high precision both in the experimental determination and in the theoretical standard-model prediction. A (statistically significant) difference between the two determinations would point towards additional effects from unknown particles/interactions. In other words, one has to understand the old physics (standard model) to find signs of new physics. At the moment a prime candidate for possible signs of new physics is the gyromagnetic ratio of the muon. Typically the precision of a standard-model prediction is limited by the hadronic contribution to the observable of interest. This is one playground of Theoretical Hadron Physics at Uppsala University. As part of an international community mathematical tools like effective field theories and dispersion theory are used and further developed that allow for a systematic improvement of a prediction and for a serious estimate of the achieved accuracy.

The genuine task of hadron physics is to explore how and why quarks and gluons form hadrons, e.g. the protons and neutrons, which in turn form the atomic nuclei. The microscopic theory to describe the strong interaction is known, it is Quantum Chromodynamics (QCD), but for many cases the corresponding equations are too complicated to be solved. To obtain a deeper understanding, one interesting challenge is to disentangle which aspects of the structure of hadrons can be understood from the symmetries of QCD, which aspects are dictated by the general properties of quantum field theory like analyticity and unitarity, and for which aspects one needs knowledge about the details of QCD. Our focus at Uppsala University is on electromagnetic form factors and on spin properties of hadrons made out of the lighter quark generations, i.e. the up, down, and strange quarks. The tools that we use and develop are again dispersion theory and effective field theories, e.g. chiral perturbation theory.

One driving force of hadron physics is the close contact between experiment and theory by competing and supporting each other in the endeavor to reach a higher accuracy in the theoretical and experimental determination of observables and, in general, to obtain a better understanding of the structure of hadrons. Consequently we collaborate on a daily basis with our experimental colleagues at the Division of Nuclear Physics. 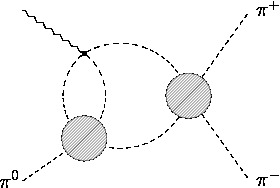